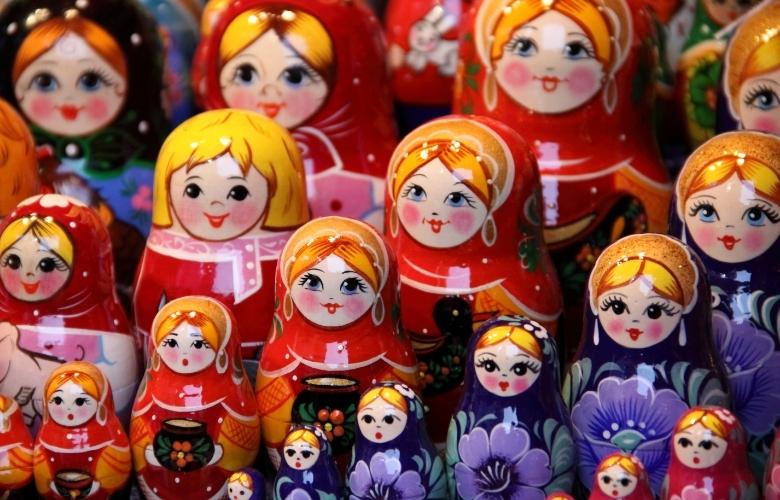 Several terms are used for naming the Russian nesting dolls: matryoshka, stacking dolls, and babushka. They are beautiful wooden dolls that easily fit one inside another. It has gained the popularity and attention of every age group, including adults, children, and other art enthusiasts. They got an introduction to this world from the Paris World Exhibition in 1900 and are still enjoying the same popularity. This is not only a toy for kids or any decorative piece. It serves as the icon of Russian culture.

Are you familiar with these nesting dolls? Come let us check out this amazing doll in a little brief introduction to Russian culture and tradition.

The Meaning Of The Name Nesting Dolls 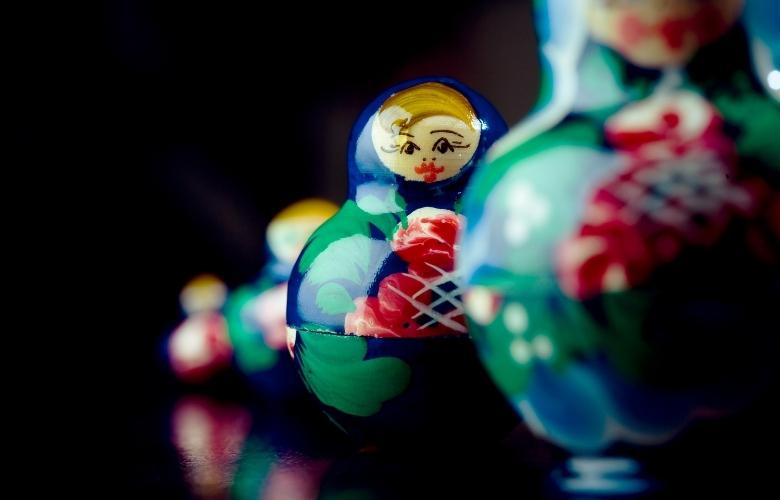 Individuals relate nesting dolls with different things based on their appearance, shape, and caricature. The most common one is related to maternity. The outermost doll, which is bigger, is considered a mother, and the rest are like children.

Besides this, there are several other interpretations too. Based on the layering pattern, it is associated with plurality, in which each of the layers acts as our different personalities. The other meaning is rebirth or constant change. 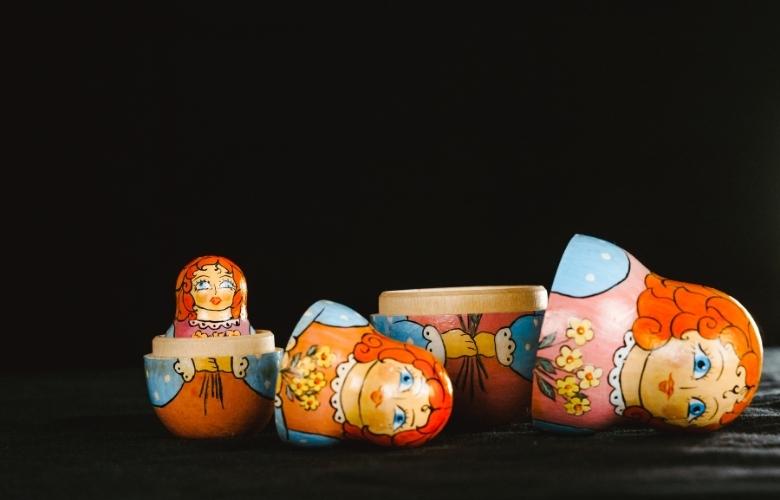 Time and geography are related to the history of Russian nesting dolls. Although currently, the origin of these dolls is considered Russian, it has its origin date back to Japan. The Chinese crafted the first nesting dolls, with multiple containers containing diminishing sizes of dolls.

These containers are good for both storage and decoration. The first dolls created by the Chinese are similar to what we have currently. The largest dolls open to present the smaller and nested dolls. The only difference from Russian designs is that the smallest one holds a grain of rice.

After China, the idea got transferred to Japan and took the form of Seven Lucky Gods. The Japanese created the nesting dolls in the image of Fukurojuro, who is a Japanese god associated with longevity and happiness.

The six others were also the image of God. It is believed that a Russian monk created the very first doll. Some say that this monk created the doll by getting inspiration from a tale of a golden statue. This doll of a monk pleased the eyes of Savva Mamontov’s wife.

Savva Mamontov was a well-known and wealthy Russian patron. He supported artists full of creative ideas and presented Russia’s folk culture and tradition. Mamontov was the founder of the Children’s Education Workshop in Moscow. He was impressed with the idea of preserving the history and culture of Russia and thus founded the workshop to let young ones know about the traditional culture of Russia.

The good gathering happened at the workshop, and one of Mamontov’s circles of artists, named Sergei Malyutin, got inspired by the words of Mamotov’s wife regarding Japanese dolls.

Malyutin sketched the first nesting dolls with linden wood and painted them and dubbed dolls “Matryoshka.” This female name was quite popular at the time of Malyutin. It was derived from the Latin word “mater,” which implied mother and acted as the inspiration for these dolls.

This word perfectly fitted the round and mothers-painted dolls. The next queue of dolls wore Sarafijin and aprons. The largest doll held 7 diminishing sizes of the doll, out of which 6 were girls and one boy.

Each of the dolls was painted with the Russian peasantry like hen, bowl, and scythes. Mostly the biggest dolls wear kerchiefs on their head, and the smallest one wears a dipper. They collectively form a specific theme, and still, you can find them.

You may also explore –  Practical Guidelines For Selecting The Toys For Kids.

How Are Russian Nesting Dolls Crafted? 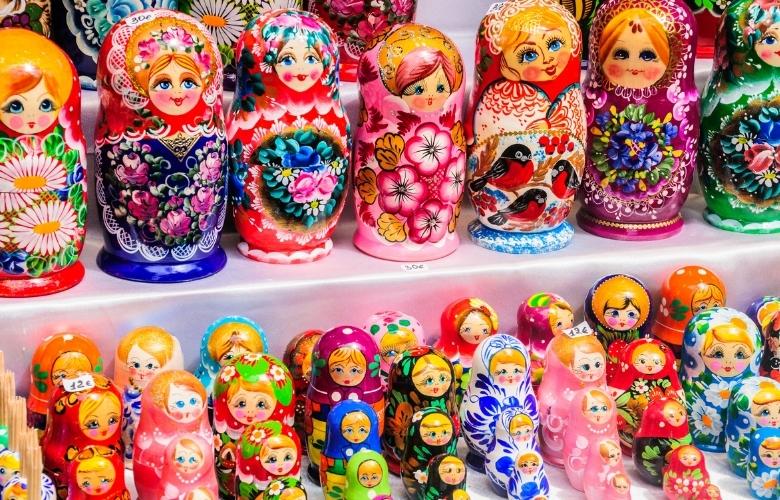 The wood must be of fine grades so that finishing should result in the best manner. Also, it should be preserved in the best condition from different climatic conditions. The good quality of the wood makes the doll durable.

Crafters prefer softwood so that they can work on it easily. They will be able to give it the best shape without damaging it. Thus with all these considerations, artists prefer linden tree wood for crafting the best quality nesting dolls.

The process starts with cutting the linden tree, stripping its branches, and removing the bark. The remaining tree log is kept as it is. There will be a need to store the logs in the best condition. Otherwise, it will result in a brittle and discolored wooden doll. Once the wood becomes suitable to work, it is then cut into blocks.

The curve shape is given using the lathe. One part is used to manufacture the bottom section, and another block is used for the top section. Each doll of the set is crafted from the same block so that there should be uniqueness and consistency in all the dolls.

The artist first puts the block of wood on the lathe machine and, with a long curved chisel and gouges, turns out the curved shape at the bottom half of the doll. Then, with a sharp knife, engraving is done on the outer side of the doll. After that, according to the sizing guide, the top half is gouged. Like this, the top portion of the doll is also crafted.

However, the lathe machine crafts 50 single dolls in a day on an average basis. That means you will be getting 50 sets of dolls in a week. Throughout the entire process, measurement is a must and should be done correctly. The first doll is used as the base model for crafting another matryoshka.

Artists use Caliber, a machine used for measuring and ensuring the correct height of a doll to get the best outcome. The dimension of the dolls varies as per the desired doll sizes.

You may also read this – Why Is Learning Coding Important For Kids? 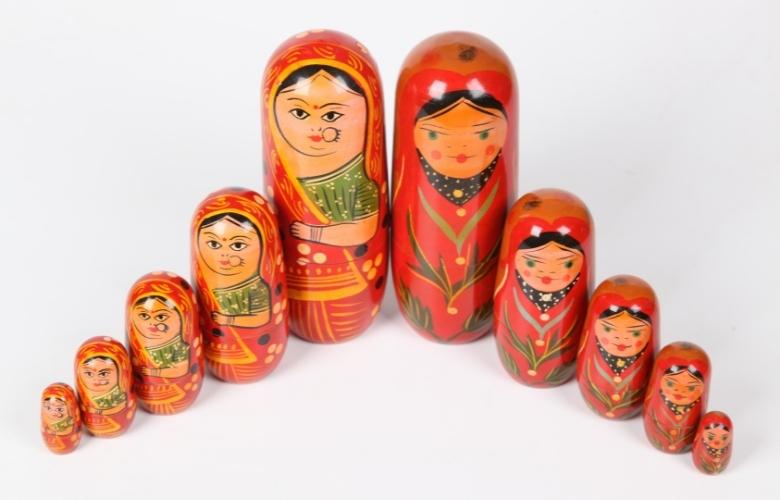 You might have heard the term Babushka dolls. They are just synonyms for Russian nesting dolls. The term “babushka” means “grandmother,” and this appropriately fits these dolls. The babushka is the mother of the mother who is already a mom and babushka.

They are not just cute dolls, but along with their fancy name, they also present several useful pieces of information. The Russian dolls beautifully depict the relationship between generations.

Nesting Doll acts as a wonderful gift for several occasions. You can use them as a present for: 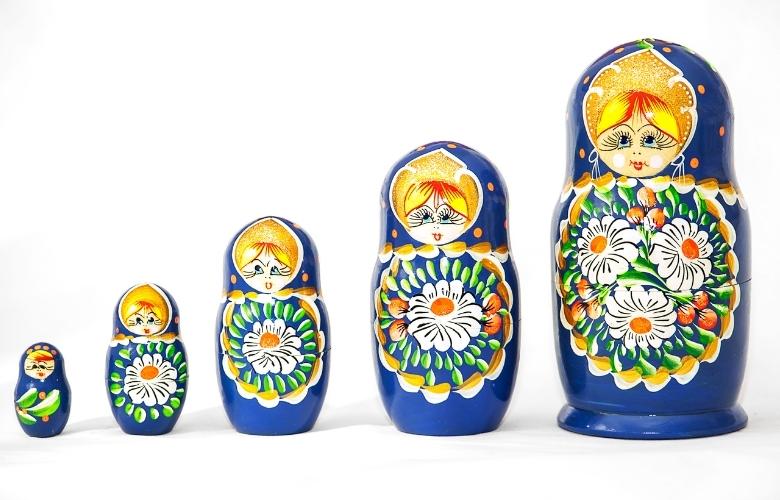 For decades, the design and pattern of stacking dolls have enjoyed immense popularity. The method used in 1890 for crafting these dolls is still followed. The whole process is based on the craftsman’s skill to turn wood in the best manner.

The bark of the wood log is appropriately stripped and secured in a stacked manner to ensure the proper airflow. Once an artist identifies that wood is ready to turn out, it is cut into planks. Before giving it the final shape, the wood log is turned 15 times.

After this, the blank dolls are painted with hands keeping in mind the bright color combination. The most surprising thing about the whole process is that there is no use of machines in the crafting and manufacturing of dolls. Precision and accuracy are a must in creating Russian nesting dolls.

The eye-catching piece of the doll is the result of hard work and efforts of craftsmanship and woodcarver.

Things To Look For In Russian Stacking Dolls 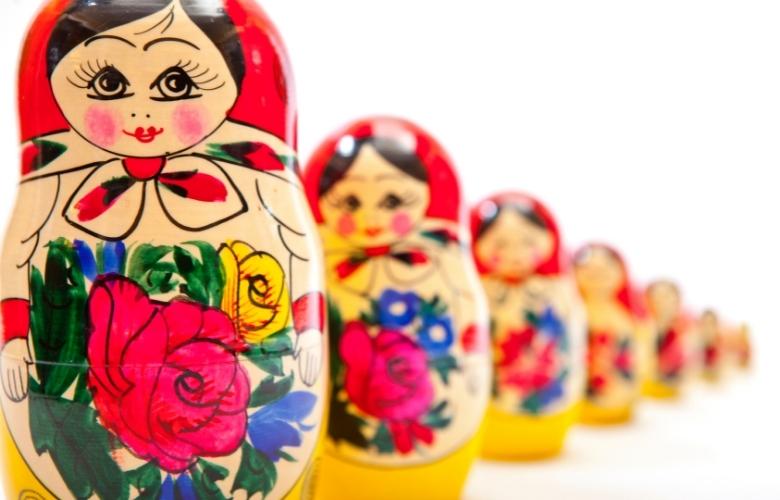 The eye-catching doll from Russia can be used as a decorative piece for your home and a perfect toy for your kids. However, the superb and colorful pieces require some factors to be checked before buying them. The first thing that you should check is the originality of the product.

There are many chances that you may receive a replica of the original product or any fake doll. For this reason, you should ensure that dolls are hand-painted. The design, being painted over the doll, should be firstly printed on vinyl. After that, it should be applied to the crafted doll.

The hand-painted and carved doll will be priced reasonably. For example, a newly designed Russian traditional nesting doll will cost you more than $100. Also, if you buy an authentic doll, it will come with a signed provenance.

The expensive category of nesting dolls is less in number, and each one of them comes with a unique design. Similarly designed Russian nesting dolls are produced in mass quantities. Therefore, the prices of such dolls will be less than the unique and antique dolls.

There is no typical age group who can enjoy the beauty and design of wooden dolls. These fun toys can make anyone happy. You can buy these toys from your kids’ learning and playing perspective. The adults are also fond of the babushka. They are designed to follow any specific theme, such as fairy tales, Soviet leaders, animals, Santa Claus, etc. The crafting mechanism of Russian nesting dolls remains unchanged. Thus they are handcrafted by artists and painted beautifully to please the eyes of the onlookers.

Explore The Russian Treasure website if you are looking for any trusted online store for getting the best designed and original Russian traditional dolls. They have a wide collection of nesting dolls designed in different themes. Russian artists handcraft all dolls, and thus they deliver the best to their customers.

Why Is Learning Coding Important For Kids In 2022?

﻿7 Reasons Why Landlords Should Hire a Property...

6 Best Dentists Gold Coast That You Can...

Where to Find the Best Coffee in Sydney

4 Best Dentists In Canberra That You Can...

Family Bonding Activities That You Can Try During...